"Such filament and fabric art reached the High Baroque (in the best possible ways) at the hand of Gae Savannah, whose witty re-contextulizations of hair clips, plastic bead-curtain prisms and colored cellophane gave even cynical jaded gallery-viewers some smiles ---while also converting the most mundane bathroom objects (again: hair clips!) into monumental visual statements."

The realtors say "location, location, location!" By virtue of location ---truly just a stone's throw from the East Broadway subway station portal--- the ground-floor, still-somewhat-new gallery Allegra La Viola has become a geographic anchor of the blossoming Lower East Side art scene. The usual route now seems to be: subway in to East Broadway, visit Allegra La Viola, then walk north past the park and go from there into the LES territory. FaceBook chatter showed that the June 2010 group exhibit got attention from some Art World major players and/or from their more stealthy reps. The show, "Off The Wall" featured sculptural creations which were attached to the wall and which were also, one way or another, "off the wall" ---as in somewhat quirky or offbeat.

Doreen McCarthy's Minimalist clear or tinted transparent plastic polygons were as much about the colorful shadows appearing on the walls as they were about the forms themselves. While such "simple" geometric sculpture can seem easy to fabricate ---and indeed some sculptures were disarmingly similar to a nearby PlasticWorksUSA window display--- it is actually not simple to bend acrylic plastic to one's will nor to shape it as desired without cracks or heat-induced blistering. McCarthy pulled it off ---and made it look deceptively easy, despite the noxious fumes and other hazards inherent to the plastic-shaping process. McCarthy's other items include the various Simulcra Order ribbon sculptures in iridescent fabric ---like fanciful artist-redesigned gift wrap bows.

Gelah Penn's three-dimensional art-scribbles of filament, tubules, and fabric scrim had an amusing habit of emerging from holes in the wall. They didn't quite hang upon the wall as much as they seemed to grow out from it. The first of the Penns seemed like tiny Frank Stellas ---present day Stella, not early Stella. Picture something like Stella's recent sculpture K 51 (last seen across town at Chelsea's Paul Kasmin Gallery) in miniature. In a case of clever gallery artwork hanging, at exactly the moment one thinks "this Penn sculpture is nice, but get off of the wall and get big already; I'd like to see one of these wall-sized," well, bam, there it is as one rounds a blind corner. Surprise! The floor-to-ceiling Penn installation was a delight for those who enjoy this sort of thing. The freeform spatial gestures formed intriguing shadows in exactly the sort of way that framed rectangles just never can.

Always amusingly and never "predictably" (in the negative sense of the word), a "surprise" waited for the attentive viewer of each Penn creation ---some little something different from the rest. The large corner piece, Suddenly, (mostly made of black filament and mesh) had a tiny red fabric berry/clitoris/eye/central ganglion. A different Penn sculpture dominated by Vaseline-glass colored material hid a black pipe-cleaner. The surprise in another Penn piece was a bit of red fabric.

Such filament and fabric art reached the High Baroque (in the best possible ways) at the hand of Gae Savannah, whose witty re-contextulizations of hair clips, plastic bead-curtain prisms and colored cellophane gave even cynical jaded gallery-viewers some smiles ---while also converting the most mundane bathroom objects (again: hair clips!) into monumental visual statements. A more intimate version of fiber-and-filament art came from the dinner-plate-sized wreathes wrought by Nicole Barrick. Some might dismiss the creations as looking too much like thrift shop vintage cotton-batting Christmas decorations, but close scrutiny prompts a double-take: they're made of hair! Such a discovery leaves some visitors deeply-impressed and others somewhat creeped-out.

The exhibit was not all threads and cloth swags; precision paintbrush-skill also appeared from Artists Amanda Smith and Helle Mardahl. Smith's clay plaque Hot Punch combined exacting glaze-drawing with whimsy and a sort of subversive humor. A group of girls in 1930's-style attire lounge on living room furniture or partake of flaming drinks from a party punchbowl. They're scowling and commiserating ---a "girls night out" of ticked-off fourth-graders. It is as if the commercially-exploited Dionne Quintuplets or perhaps the relentlessly upskirted Balthus art-models realized what was up and met to plot vengeance. A Japanese screen and jungle foliage in the background multiply the fanciful effect. In another Smith plaque, Palace, a Biblical-style village in the foreground is watched-over by a gigantic Balthus-Dionne girl on the horizon. Amusing as it is to imagine her deciding to stomp the town asunder as Godzilla would flatten blocks of Tokyo, the artist's hand-skill impresses: some of the girl's details seem to have been drawn with a single-bristle brush.

Fabric-relief sculptures by Helle Mardahl sometimes rendered birds precisely and other times took on a sort of graphic-novel S&M StrongBad quality. Those delighted by the careful wildlife realism in parts of The Helle Mardahl Ark might be somewhat off-put by the creepy comic feel of The Football Mike or The Comic Figure II ---and vice versa. Rounding out the show, Grace Sutton's paintings and fabric designs evoked late-Matisse's abstract paper-cut collages, but with contemporary twists: drivers' wheels (in Out of Blue) and baby carseats (in Twins) sneaking into the colorful fields of shapes.

"Off The Wall" at Allegra LaViola

"The show also gathers some impressively crafted artwork including Gae Savannah's miniature shrines to shopping (made of accessories from beauty stores)." 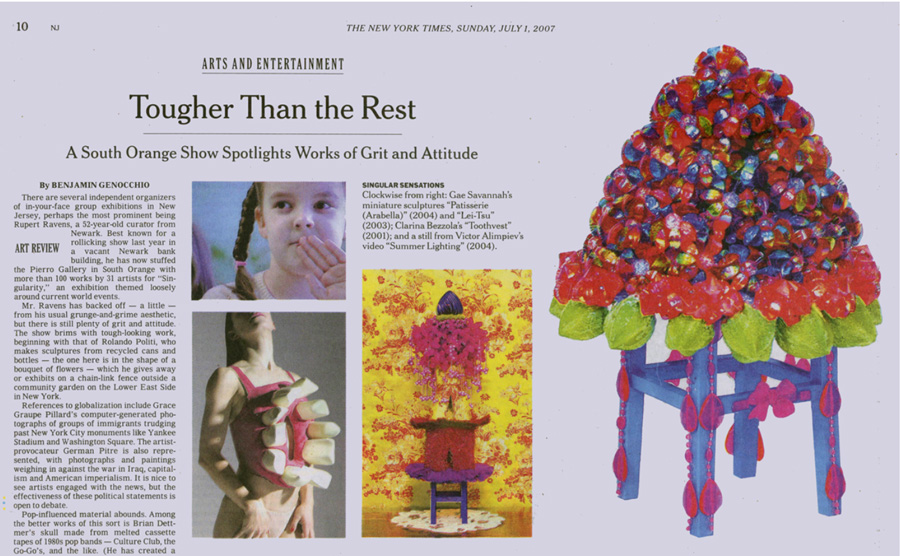 "Savannah's work challenges our pre-conceived notions relative to form and function. Her sculptures will forever change the way we look at the connection between ornamentation and function, just as they remind us of how the most common objects have the potential to become treasures." 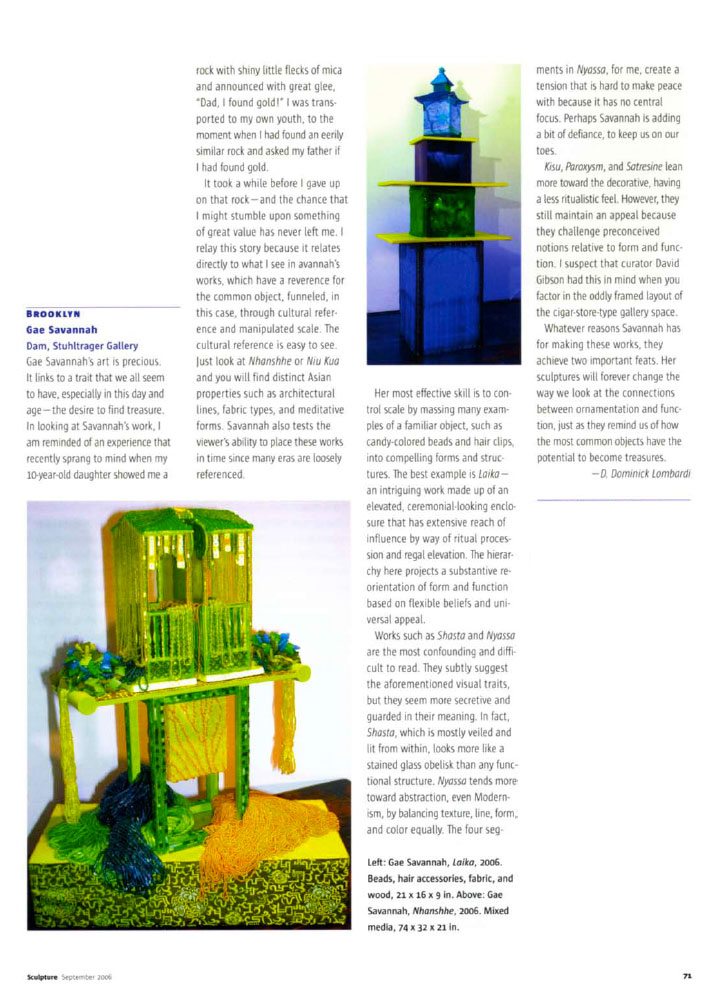